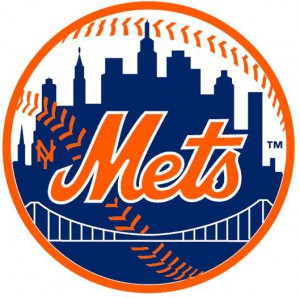 “We pulled into the outer ring of the parking lot and as fast as we could we cut open boxes of foam Steroid/Asterisks and started passing them to New York Mets fans. I don’t know why I felt like I was doing something wrong but I did, so we passed those Foam Steroid/Asterisks out double time.

And before we know it here come the cops. I was reaching for my keys when one of them said…

Man, there really is something great about New York City! Not the type of people who tend to look the other way that’s for sure.

One hour later the van was full of plastic and boxes. Not one asterisk was left. One thousand Foam Steroid/Asterisks were inside Shea stadium… and tomorrow the New York Post would tell the tale. Me and Stanford grad bought a couple of tickets and headed into the game.

Asterisks waved as the planes landed at LaGuardia. We watched a pretty great game of baseball and the Giants won in twelve. Mr. Bonds went hitless. And on the scoreboard I see that the Cubs lost. Off to Queens for a bite to eat and some shut eye.

I didn’t sleep all that well and I’m sure the anticipation of reading about one thousand asterisks in the New York Post didn’t help. So…

Not a word?! Not a word of the thousand foam Steroid/Asterisks. Not one single word.
I was now truly back in the Illinois basement.

Down one more rung on the latter I fell. I mean those signs were pretty good…
but what about the fan who gave away one thousand Foam Steroid/Asterisks!!
What about the article already written by the Post writer?

Oh by the way his name is Phillip Recchia and he writes very well. His article was much better than what I saw in the paper that day. Wow. I just buckled. Fortunately my Stanford friend was there because if he wasn’t there I don’t know who I would have leaned on.

I called the Post writer and simply put, he was aghast and flummoxed all at the same time. He said something about his editor’s editor and what really happened I do not know. I asked him if he thought it had anything to do with the fact that the New York Post was owned by Fox and Fox does MLB games… he just remained silent. Who knows? You know I don’t have much time for conspiracies but this one still has me stumped as to what happened.

I must admit to going into a bit of a funk but the season came to a close and the Cubs were miserable so I knew that at least most of the baseball world was as it should be. And the Dodgers made the playoffs and my Dodger loving wife was happy so I licked my wounds and set aside the Foam Steroid/Asterisk for the winter.”

“Come April I start getting the – I can’t turn and look the other way itch again.

I managed to wrangle a brief mention in Sporting News. Asterisk sales spiked but again no effect on the national dialogue. No Asterisk Party. Voices remained muted. On I plodded filling pizza boxes with foam Steroid/Asterisks. Ohio, New York, Illinois, all over the US Foam Steroid/Asterisks flew.

An article in the LA Times boosted Asterisk sales again. And the more asterisks I sold the more the powers that be turned their heads the other way. Oh I’m pretty sure they know we’re here. Why, just last week I went to Dodger stadium with a filmmaker.

I carried my bags of foam Steroid/Asterisks up to the outer edges of Dodger Stadium property. I proceeded to hand out the new improved colored asterisks to those Giant hating Dodger fans.

I was told I could not sell them without a vendor’s license and there are only two places in LA where they allow street vending and Dodger Stadium was not one of those places. So I decided to give them away for free… I figured it would be good publicity and with our website – www.FansLoveBaseball.com – stamped on the new asterisks, fans could find out where to order for them for next game. Grassroots marketing… that’s where these things begin I’m told.

So I’m standing on public property passing out free asterisks meeting new friends. The ticket scalper to my left was friendly and helpful and the guy selling bootleg hats to my right asked for one of the asterisks.

“The Home Run King.!” He shouted

And just at that moment a blue car pulled up. It was one of those real official looking kind of cars. And the uniformed lady on the passenger side was waving one of us over. Crap, I thought, the ticket scalper is gonna get it. Before I could blink they passed him, no… they’re after the guy selling bootleg hats!

And they stop. In front of me. Flash! A badge.

“I’m giving these away as a protest. I’m on public property” I tell them.

And let me tell you friend I thought they had gone mute. The lady looked at the driver, the driver looked back at her… and for all appearances they were stumped. Then without a smile the driver says…

“You have to leave”

Now I’ve always been one to respect the authorities and I figured there was no upside to pushing any further, and it sounded like they meant business, so I packed up my asterisks we headed home… the two of us… me and my filmmaker friend who caught the whole thing on camera.

My filmmaker friend says that footage should go into a documentary called Kiss My Asterisk. He has a real sense of humor and truth be told I think he’s a Giant fan. More“